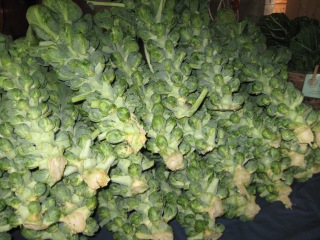 from Taste for Life Magazine, serves 8 to 10

2) Put brussels sprouts in a large bowl.  Add oil, rosemary, salt, and pepper and toss together.  Transfer to a  roasting pan and cover with aluminum foil.  Roast for about 20 minutes, until just tender.

3) Remove from oven, discard foil, and sprinkle shallots over sprouts.  Roast for an additional 15 minutes.  Remove and let cool.

4) To make dressing, combine oil, vinegar, maple syrup, water, cayenne pepper, and salt in a blender and blend until smooth.  Transfer to a bowl, add parsley and thyme, and whisk together.

preheat the oven to 400 degrees

In a large bowl combine the balsamic vinegar, garlic, and mustard; mix well. Pour the vinaigrette over the sprouts.

Add the water to the bottom of the baking dish. Bake until the Brussels Sprouts are tender-firm, 30 to 45 minutes.

Trim the Brussels sprouts and cut an X in the bottom of each one with a paring knife. Boil the sprouts in salted water until tender, about 8 minutes, then drain. Melt the butter in a sauté pan over medium heat and gently cook until it begins to turn light brown. Add the pecans and toss to coat them with butter, cooking for a few minutes until lightly browned and fragrant. Add the Brussels sprouts and cook, stirring, until warmed through. Season with salt and pepper. Serves 4.

Trim Brussels sprouts and cut in half.  Heat a cast iron pan over medium flame.  Add some oil.  Sprinkle salt evenly over bottom of pan.  Lay Brussels sprouts cut side down in the pan.  Cook until deep brown or almost black in some places, about 5 minutes.  Add apple cider, cover pan, and turn off heat.  Let them continue cooking off the heat another 5 minutes.  Serve with grilled chicken or black eyed peas.

Trim end off Brussels sprouts and halve the large ones.  Blanch in boiling water or steam over boiling water until just tender.  Plunge into ice water to stop the cooking and preserve the bright green color, then drain well. Meanwhile, cook bacon until crisp and drain on paper towels.  Remove all but 2 Tbsp of bacon grease from pan.  Add onion; cook until brown.  Add Brussels sprouts, butter, vinegar, salt, pepper, and bacon.  Toss until hot.

Combine soy sauce, sesame oil, crushed pepper, garlic, and 3 tablespoons water in a large bowl. Blanch the Brussels sprouts in boiling water until partially tender, 3-4 minutes. Drain well. Heat wok or large, heavy skillet over high flame until the air looks hazy over the pan, 2-4 minutes. Add a small amount of the peanut oil, swirl the pan to coat the surface, and add about a third of the sprouts. Stir-fry until bright green and crisp-tender. Drain on paper towels. Stir-fry the remaining sprouts similarly, in batches. Add stir-fried Brussels sprouts to soy sauce mixture and toss well. Serve immediately or allow Brussels sprouts to marinate one or more hours before serving.